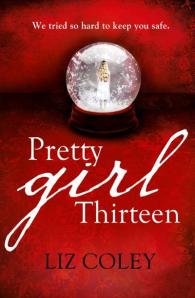 The blurb: A gripping, suspenseful debut that will haunt you long after you have turned the final page…

Angie Chapman is only 13 when she gets lost in the woods in the middle of the night.

The next thing she knows she’s returned home, scars around her wrists and ankles, physically exhausted. Her parents collapse into tears when they see her, but Angie doesn’t understand – until they tell her she has been missing, presumed dead, for three years.

Angie doesn’t remember anything from her missing years. But there are people who do – people who could tell Angie every terrifying detail, if only they weren’t locked inside her mind. With help, Angie begins to unravel the darkest secrets of her own past.

But does she really want to know the truth?

My review: What an interesting and original take on abduction. (There’s a sentence I never thought I’d hear myself saying) Pretty Girl Thirteen (PGT) really intrigued me. Since finishing it I’ve checked out several other reviews on Goodreads and the main critiscism for the book appears to be a lack of originality. All I can say to that is, it really depends on the reader! As someone who hasn’t come across this in a book before and hadn’t read the synopsis before starting the book, found it a refreshing and interesting take on something that could’ve been very formulaic.

With that in mind, I’ll try not to ruin it for future readers. Angie Chapman returns to her family after a considerable absence and remembers nothing. She has no recollections, has no possessions, or very little, and doesn’t know how she seems to have aged three years or how she has found herself outside her parents house. The ongoing journey she must undertake to remember is fraught and heart-breaking. Each ‘character’ Coley creates is an odd mix of two-dimensional natures that fits perfectly with the situation she has created. (Really hard to write about this without giving too much away!)

This is a very intriguing book on what the mind can do to protect it’s owner from abuse. It’s also a very sad and disturbing book on the horrors humans can inflict on each other, but as, I would imagine, a YA book the trauma is left to the readers imagination which is a thankful omission. Some things you just don’t need to be told explicitly. An intriguing and dark book that really stays with you.