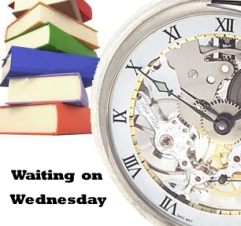 I am Waiting again on Wednesday! This meme is hosted at Breaking the Spine and is based on a book you can’t wait to read that hasn’t been published yet.

*
So my book for this week is: THE RIVER OF NO RETURN

The blurb: ‘Time is like a river. It always flows in one direction.’

What if everything you thought was certain was not? 1812: On a lonely battlefield in Spain, Lord Nicholas Falcott, Marquess of Blackdown, is about to die ….

But, the next moment, he inexplicably jumps forward in time, nearly two hundred years – very much alive. Taken under the wing of a mysterious organisation, The Guild, he receives everything he could ever need under the following conditions: He can’t go back. He can’t go home. He must tell no one. Accepting his fate, Nicholas begins a life of luxury as a twenty-first century New York socialite, living happily thus for the next ten years. But, when an exquisite wax sealed envelope brings a summons from the Alderwoman of The Guild, Nicholas is forced to confront his nineteenth century past.

Back in 1815, Julia Percy’s world has fallen apart. Her enigmatic grandfather, the Earl of Darchester, has died and left her with a closely guarded secret, one she is only now discovering – the manipulation of time. In terrible danger from unknown enemies, Julia flees her home to the sanctuary of neighbouring Falcott House. In this strange place Julia and a recently returned Nicholas are drawn to each other and together they realise how little Julia knew about her beloved grandfather and begin to understand his ominous last words…  ‘Pretend.’
*

This is a bit of a cheat as I’ve read this book already but I CAN NOT WAIT to buy it in hardback. I’ve read it through Net Galley and it’s completely fantastic, I haven’t felt this way about a debut novel in such a long time. GO. Pre-order it now, you won’t be disappointed, it’s brilliant. Full review to come… although you can guess the star rating already!

The River Of No Return by Bee Ridgway

PRE-ORDER ME! The River of No Return

One thought on “Waiting On Wednesday: The River Of No Return”