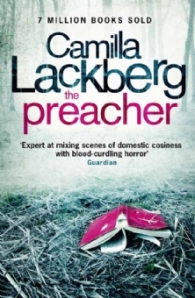 The Preacher by Camilla Lackberg

The blurb: In the fishing community of Fjallbacka, life is remote, peaceful – and for some, tragically short.

Foul play was always suspected in the disappearance twenty years ago of two young holidaymakers in the area. Now a young boy out playing has confirmed this grim truth. Their remains, discovered with those of a fresh victim, send the town into shock.

Local detective Patrik Hedstrom, expecting a baby with his girlfriend Erica, can only imagine what it is like to lose a child. When a second young girl goes missing, Hedstrom’s attention focuses on the Hults, a feuding clan of misfits, relgious fanatics and criminals. The suspect list is long but time is short – which of this family’s dark secrets will provide the vital clue?

My review: There is something about the free church and evangelism that I find inherently creepy. That’s not say I dislike religion as a whole, just the kind where people are deceived for money! Or the fame of the preacher is more important than the faith of the flock.

I enjoyed reading The Preacher. Not in the same way I enjoy reading an S. J. Bolton book but it’s more comfortable, it goes at it’s own pace, even when lives are at stake it seems not to feel the pressure to speed up!

Nice cover, iconic, effective use of colour. Bad materials, didn’t like the shiny plasticy cover, felt very wipe clean which is odd for a book! Camilla Lackberg is another author being touted as a Swedish Crime Sensation by her publishers! There are an awful lot of these now. But unlike her counter parts Lackberg doesn’t go for the eerie, the supernatural, or the fast-paced thriller, it’s a quiet kind of police detective that lives in Fjallbacka, one who goes home on time and doesn’t have many bad habits but picks up shrimp for dinner on the way home and massages his wife’s feet. Quite refreshing in a way that Patrick Hedstrom is such a nice guy! I was surprised when they even had forensic evidence, I half thought by the way they went about the investigation that they hadn’t heard of DNA evidence. Although it’s probably a more accurate portrayal of police work than in many other novels, lots of waiting around and creating lists of things!

The villains in the piece, not giving anything away, are members of the same family. I thought it would’ve been nice to have a different criminal element thrown in, after all, if you know it’s a member of one family and someone’s been kidnapped there must be a part of you that thinks it would be easier to  just arrest the whole family! Anyway, gripes aside, I did read this and finish it, even when I could’ve been reading other things. I may give her another go, sort of a lesser Fred Vargas at the moment, let’s see how the series progresses!

BUY ME! The Preacher (Patrik Hedstrom 2)