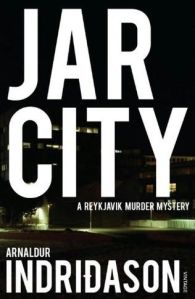 The blurb: A man is found murdered in his Reykjavik flat. There are no obvious clues apart from a cryptic note left on the body and a photograph of a young girl’s grave. Detective Erlendur is forced to use all the forensic resources available to find any leads at all. Delving into the dead man’s life he discovers that forty years ago he was accused of an appalling crime.

Did his past come back to haunt him? Finally, Erlendur’s search leads him to Iceland’s Genetic Research Centre in order to find the disturbing answers to the mystery. This prizewinning international bestseller is the first in a new series of crime novels set in Iceland.

My review: A bit of a mixed bag here but I think that’s because I’ve read so much Scandinavian/Icelandic crime now that I have very high expectations!

This is a dark, dismal novel, it seems to rain permenantly and the weather infects the characters and the scenario with a sort of drizzly greyness. The characters themselves aren’t very likeable, even when a Detective is desperately flawed there is normally an element of his character that redeems him but nothing like that here, you just don’t like them! The names are confusing, the locations are confusing. Crime in translation needs careful adapting and I think this was done sloppily. But it kept on a pace, I became invested, was interested to know who had done it but the suspense and the tension just wasn’t there. The first in a series I sadly don’t think I’ll go back to.