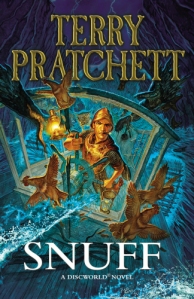 The blurb: It is a truth universally acknowledged that a policeman taking a holiday would barely have had time to open his suitcase before he finds his first corpse.

And Commander Sam Vimes of the Ankh-Morpork City Watch is on holiday in the pleasant and innocent countryside, but not for him a mere body in the wardrobe. There are many, many bodies and an ancient crime more terrible than murder.

They say that in the end all sins are forgiven. But not quite all…

My review: Ever since the day about ten years ago when I walked into a British Bookshop and picked up A Colour of Magic (I had been seeing them everywhere and I wanted to start at the beginning) Terry Pratchett has been one of my very favourite authors.

Despite having what must be a terrible hinderance to his writing (Alzheimer’s) Pratchett’s novels don’t seem to be affected at all, Snuff is quite absolutely a delight to read.

Sam Vimes is in the country on holiday, which of course means he’ll be looking for criminals, never one to rest on his laurels and never happy without someone to chase. Vimes has a penchant for finding the little crime that leads to the very big crime and Snuff is no different. The book touches on racism, genocide, slavery, class and that which makes us human.
Pratchett’s observations on the human condition are what really makes his books sing, he seems to find the little nuances in human nature that appear to apply to you personally, the reader, that makes you feel that he must be a man of extraordinary insight. Beautifully written, beautifully packaged, this is definitley one to savour.