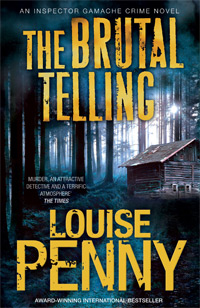 The Brutal Telling by Louise Penny

The blurb: In the heart of the forest, two men sit at midnight, haunted by fear of discovery. In a few hours’ time, one of them will be dead, his secrets following him to the grave… When C. I. Gamache is called to investigate a murder in the picturesque Three Pines, he finds a village in chaos. A man has been found, bludgeoned to death, and there is no sign of a weapon, a motive or even the dead man’s name.

Gamache and his colleagues, Inspector Beauvoir and Agent Isabelle Lacoste, start to dig under the skin of this peaceful haven for clues. They slowly uncover a trail of stolen treasure, mysterious codes and a shameful history that begins to shed light on the victim’s identity – and point to a terrifying killer…

My Review: What a wonderfully written book. I am by no means a connoisseur of the crime genre but this is the kind of book that will make me reach for another and another! Its tricky to review crime without giving too much away and this is a book that doubles back on itself so many times that I was left wondering if the ending was actually the ending! It is beautifully composed and plotted – the finger of guilt wavers over everyone’s head!

Chief Inspector Gamache is a brilliant creation, a man who is imminently likeable and seems to have limitless patience. The impression given is that you wouldn’t want this man as an adversary as his dogged determination and intuition for human nature would keep him going until every last stone was turned. His hand picked homicide team are a mixture of characters that compliment each other well and there is a nice element of quirkiness that is not overdone.

Penny’s plot really draws you in, she takes the time to set the scene so that by the end of the book it feels like you know every character on a personal level.

Each character begins with a clean slate and Penny has the uncanny ability to draw out their flaws and their talents in a subtle way that makes them seem extremely real. If three pines was a real place I’d want to go there – even if the body count keeps rising!

BUY ME! The Brutal Telling: 5 (A Chief Inspector Gamache Mystery)